The establishment of the Scottish Country Dance Society was thanks to three key individuals: Mrs Ysobel Stewart of Fasnacloich, Mr Michael Diack of the Glasgow publishers Patersons and Miss Jean Milligan, a lecturer in Physical Education at Jordanhill College in Glasgow.

In the years following the First World War there was an upsurge of interest in traditional song and dance in England. The English Folk Dance and Song Society had been formed in 1911, publishing several books of country dances that were taken up by the Girl Guides Association, both in England and in Scotland.

In the early 1920s Mrs Ysobel Stewart was the Guide Commissioner for Argyll and was of the opinion that it was more appropriate to teach Scottish Country Dances to Scottish Guides, feeling strongly that these dances should be preserved for future generations. She made a list of Scottish dances which she had known all her life, and along with the accompanying music she approached the Glasgow based publisher Patersons, with a view to producing a book of these dances.

Patersons agreed to take on the project and at a meeting with Michael Diack, he told Mrs Stewart about the Beltane Society, which had been formed in Glasgow in 1912 to popularise Scottish dancing, but which had failed due to the outbreak of war.

Through his work as Superintendent of Music in Glasgow Schools, Diack knew Jean Milligan, a lecturer in Physical Education at Jordanhill College and a founding member of the Beltane Society. She was also a collector of dances and music, and taught Scottish dances to her students. Diack arranged for the two women to meet and from that meeting they decided to proceed with the publication of a book of twelve dances, as well as forming a Society to support the publication.

A public meeting was held in the Athenaeum, Glasgow, on 26 of November 1923 at which it was decided to form the Scottish Country Dance Society. An interim Executive Committee was formed that included Miss Jean Milligan, Miss Lilian Ross, Mr Michael Diack and Mrs Ysobel Stewart as Secretary, with an annual membership fee of 5 shillings. That fee remained unchanged until 1967 when it was increased to 7 shillings. 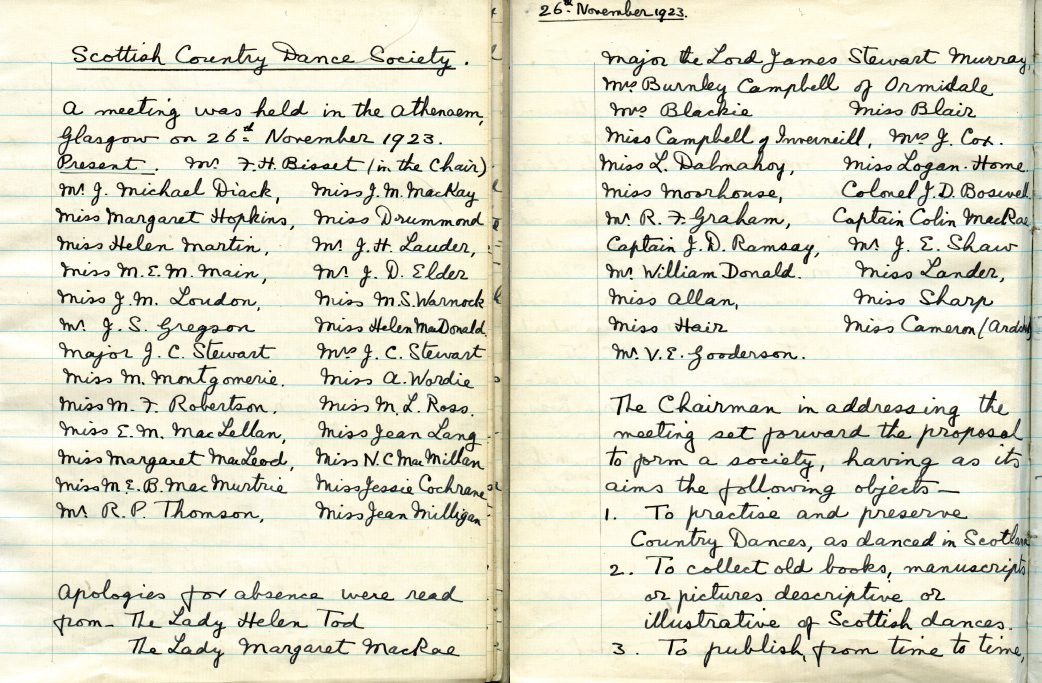 Following the first meeting of the Executive Committee, sub-committees for Research and Publications were formed and it was agreed that work on Book 1 would start immediately. Miss Milligan and Mrs Stewart each contributed six dances from their personal knowledge. Using a group of dancers from her 'Old Students' class, Miss Milligan undertook the task of preparing the dances for publication and Book 1 was published in January 1924.

At the first AGM in November 1924, Lord James Stewart Murray (who became the Duke of Atholl in 1942) was elected Chairman and President (the latter position he held until his death in 1957). The new Society grew rapidly and soon spread abroad with the first overseas Branches being formed in 1950. In 1947 Princess Elizabeth became Patron of the Society and remained as Patron upon her accession to the throne in 1952. In the year before Princess Elizabeth's accession, her father King George VI bestowed the title of "Royal" on the Society as a mark of its excellent service to social life in Scotland.