The Reel as a dance form is Celtic in origin. It is a variety of Country Dance in which the dancers perform traveling figures alternating with “setting” steps danced in one place. When dancing a Reel, typically there should be sets of two or more couples.

Tracing back their history, Scottish Reels are mentioned as early as the 16th century. Except in the Scottish Highlands, where they disappeared under the influence of the Presbyterian church in the 17th century and later reappeared in the Scottish Lowlands after 1700.

Listen to an example of a Reel:

The actual Reel as a tune genre can be further sub-divided into different types or styles. All of these are represented in the repertoire of Scottish Country Dances and you can find out more on each style below.

These are very simple tunes and usually easy to play. Maxwell’s Rant is a good example of a popular tune. As this tune is in 2/4 time its rhythm is mainly quavers with occasional appearances of semi-quavers grouped in twos or threes (if it had been in 4/4 time then it would mainly consist of crotchets with occasional appearances of quavers grouped in twos or threes.)

The word ‘Rant’ in the title literally means dance. The dance and the music appear in Rutherford’s Collection of 1752.

Listen to 32 bars of Maxwell’s Rant; the quaver rhythm is clearly evident.

These are more complex and can sometimes be technically challenging, particularly some of the old fiddle tunes. Johnny Groats House is a good example. Its rhythm is of continuous quavers. It is an old fiddle tune composed by Neil Gow and was originally published in 1884.

Hornpipes are easily recognised because of the distinctive three-crotchet (yom, pom, pom) rhythm at the end of the phrases. It is this rhythmic feature which identifies the tunes and they can therefore be either very busy (like a double reel) or simple. It is in 4/4 time.

Originally they were a musical wind instrument and linked to several dances supposedly performed to it. The instrument was a single-reed pipe with a cowhorn bell (sometimes two parallel pipes with a common bell) and is often converted into a bagpipe. Known since antiquity, it is today played in Basque Spain (where it is known as an alboka) and North Africa, as well as in the Arabian Peninsula and parts of Russia.

The term Hornpipe also refers also to several dances that Renaissance courtiers believed were once performed to the rustic instrument. They could be at times it meant a Jigs, Reels, or country dances.

The Hornpipe can be found in Irish, Scottish and English dance traditions. There are two variations of the hornpipe danced in hard shoes fast and slow. In Scottish Country Dance music Hornpipes are played at the ‘fast’ speed – the same speed as reels. Many dances described as  Reels use Hornpipe tunes.

Since 2016 the RSCDS has dropped the descriptor of the Hornpipe genre when describing the dance. For example, The College Hornpipe is now described as an 8 x 32 Reel.

Listen to 32 bars of The College Hornpipe (RSCDS Book 20). The characteristic three-crotchet rhythm at the end of the musical phrases is clearly evident. Here the sequence played is: A, A, B, B. 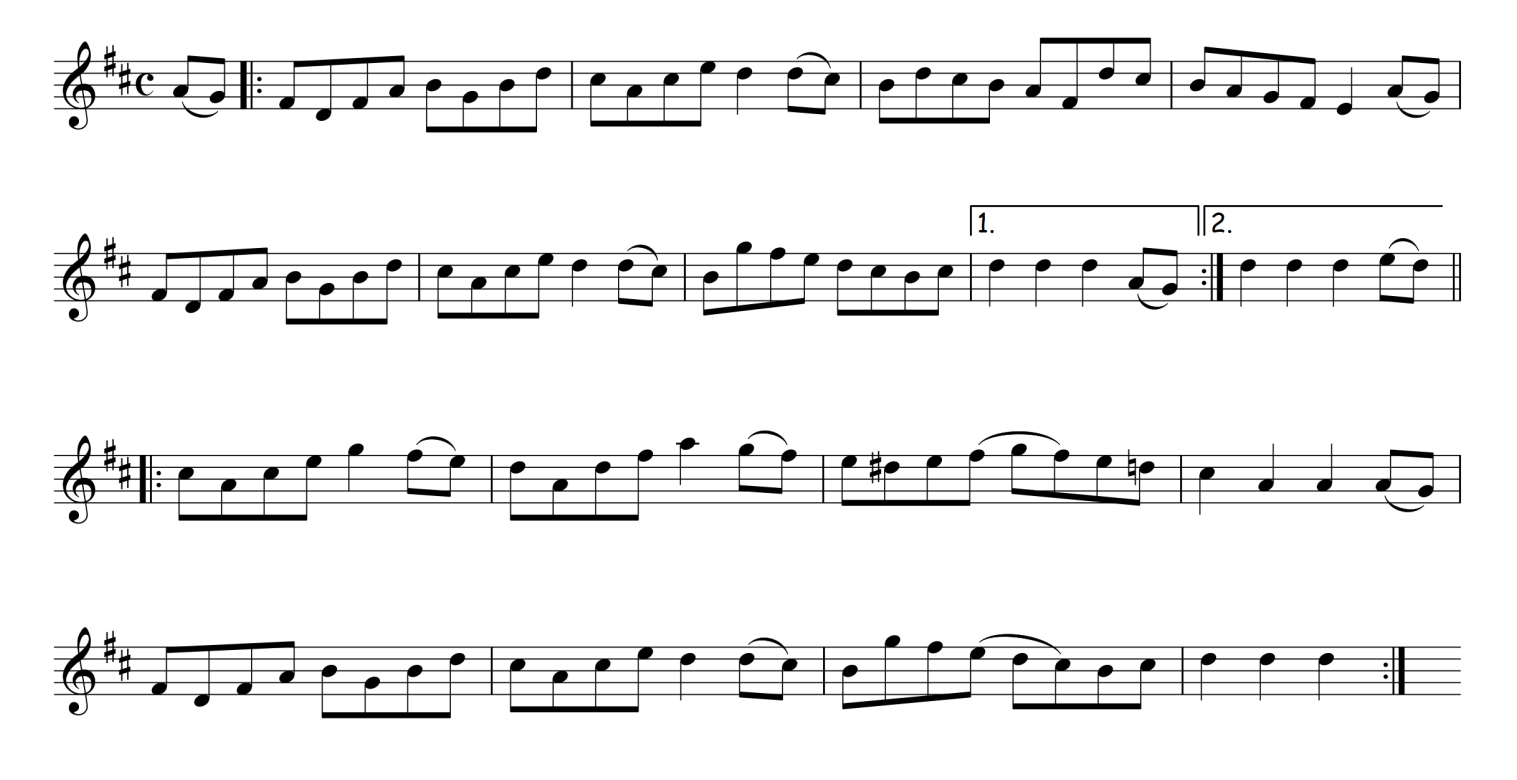 Pipe Reels as their name would imply have their origins in bagpipe music. They tend to be ‘double’ in nature, are invariably in 4 or more parts and have a very distinct recognisable style. Usually Pipe Reels are at least 64 bars in length and are in 4/4 or 2/4 time. The typical sequence of a Pipe Reel is A, A, B, C, C, D. The B and D sections being 16 bars long and usually the second half of the Bs and Ds recalls the last four bars of the second A section. This means that once through the Pipe Reel gives two times through a 32-bar dance. Examples of these are the original tune for The Reel of the Royal Scots or Mrs MacPherson of Inveran.

If the dance happens to be 40 or 48 bars long then the tune has to be modified to make it fit.

As in the Pipe Jig the Pipe Reel has a rhythm that predominantly quavers. What sets these tunes apart from the other Reels is that their melodies use the ‘Pipe Scale’, which only consists of 9 notes. It is based on a scale of an octave plus one note together with a flattened 7th note. It is this that gives pipe music its distinct feel and sound. For example: G, A, B, C#, D, E, F#, G, A.

Listen to the Pipe Scale.

Listen to 32 bars of The Reel of the 51st Highland Division (Book 13) played by Neil Barron the original tune for the dance of the same name. This tune is in 2/4 and only has two parts. The semi-quaver patterns are clearly evident, and the sequence played here is: A, A, B, B (32 bars). If this tune was written in 4/4 then quaver patterns would be predominant. 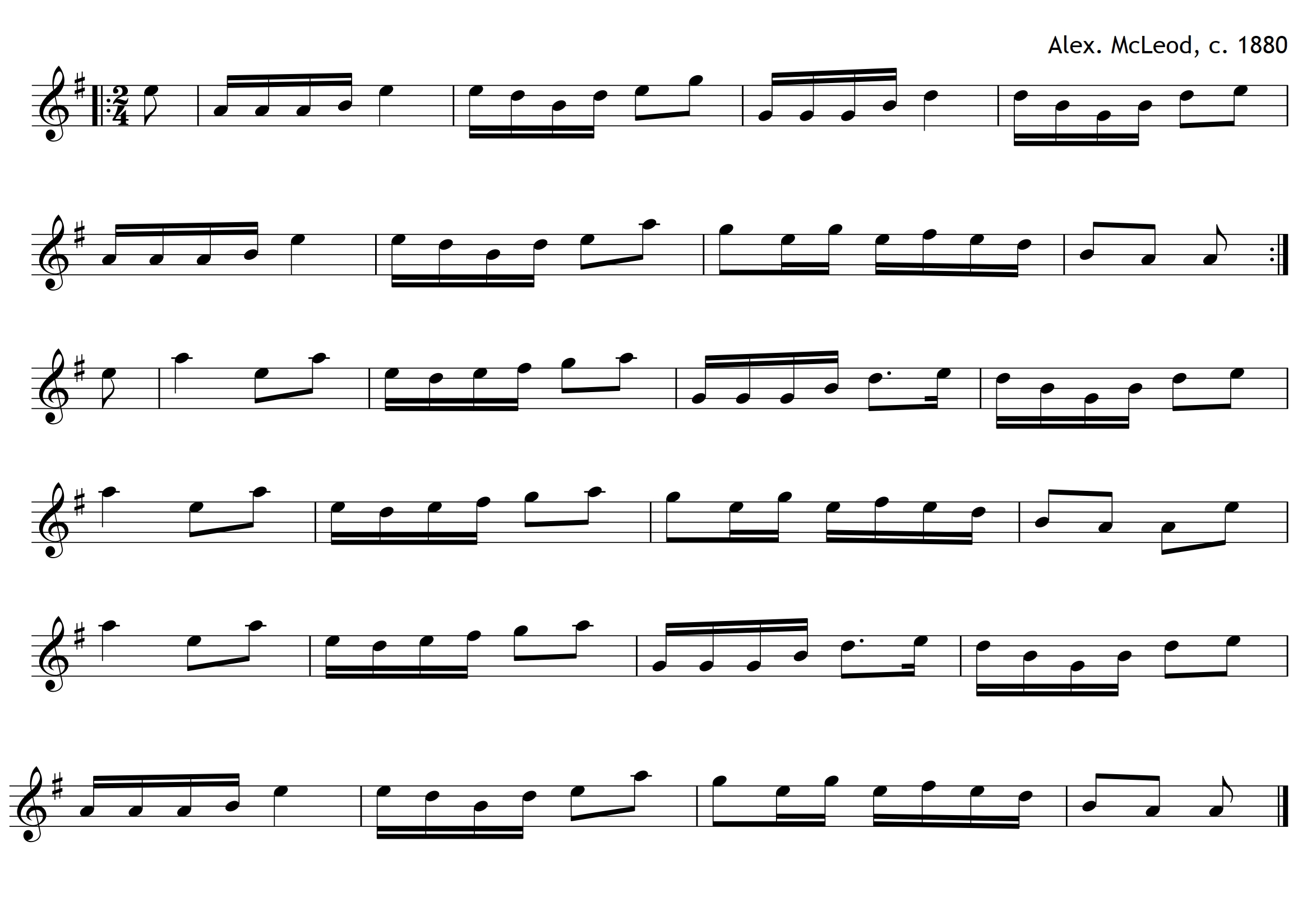 Sometimes Pipe Marches in 2/4 time are used as Reels although playing the tunes in this way and at ‘Reel’ speed will not necessarily have been the composers intention. An example is The Earl of Mansfield where the tune is played as a Reel in a 48 bar sequence (A, A, B, B, C, D)

Listen to 48 bars of The Earl of Mansfield played here by Neil Copeland, the original tune for the dance of the same name. Compare this with the sound sample of The Reel of the 51st Highland Division you can hear very clearly how the tune is different.