What is Step Dancing?

What is Step Dancing?

Step Dancing contains a wider range of steps and movements than found in Country Dancing, but it is also inclusive and fun, with a range of dances suitable for dancers of any age and experience. The RSCDS is involved in teaching both forms of dance (you can find Step classes at our Summer School).

We hope that you will learn more about Step Dancing and perhaps pursue this wonderful form of dance in addition to Country Dancing!

Step dance at RSCDS St Andrews Summer School has had many names and few definitions.  In a paper in 1994 Mrs Isobel Cramb said, “I can find no generally accepted definition of Step Dance and would therefore myself suggest that it is an enchaînment of steps in varying mixtures of French and Highland styles”.

Originally Summer School ran classes in what was called Ladies’ Highland, then Ladies’ step, now just Step dance.  The early classes, in the 1930s, taught by ‘Dancie’ John Reid, kept alive a particular tradition of old dances, such as the 6/8 Blue Bonnets, which passed to teachers, such as Mrs Tihi West and Mrs Hope Little.  The subsequent discovery and interpretation of some of the ‘high’ dances in the Hill ms (1841) by Tibbie Cramb, aided by Flora Cruickshank, and the publication of the book Four Step Dances set the foundation of the RSCDS’s own tradition of Step dancing. Since then there has been a flowering of new dances devised by a range of talented step dance teachers, both in Scotland and in many other countries, where Scottish music and dance traditions continue to be popular. 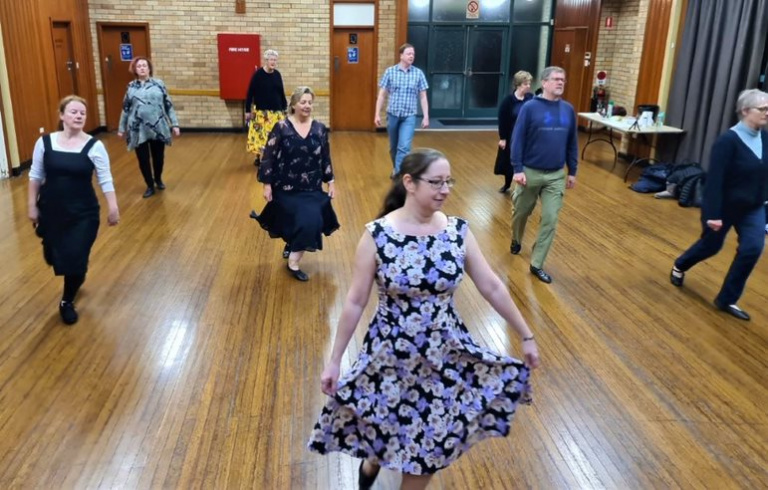 Step Dances can be solo dances, or for two or more dancers. A Step Dance consists typically of some 6 or 8 steps of 8 bars, often ending with a “close” (chorus). The individual movements and steps recur frequently in many dances and show the combined influences of the Scottish, French and Irish traditions. The marriage of movement and music is nowhere more apparent or more necessary than in the performance of step dances. This is particularly true in reference to the rhythmic matching of the steps and the tunes.

The music is very attractive and enjoyable to listen to and generally more gentle in style than the Jigs, Reels and Strathspey tunes danced to by Scottish Country Dancers.  This reflects the gentler and very elegant dancing, almost balletic in style that characterises these "Ladies" Step Dances. Many of the old dances were written for young ladies of the 'big' houses in Scotland. These young people of the 18th century would have been encouraged and educated in the arts, including dancing, which was taught by the visiting 'dancie'.

Excerpts for this section were taken from an article written by Susan Nedderman, and edited by former Chairman Helen Russell.

In 1841 Frederick Hill, a tailor from Alford in Aberdeenshire, wrote in a notebook details of many dances including a dozen Step Dances. These were interpreted in 1946 by Miss Cruickshank, last of a long line of dance teachers in Aberdeenshire. Miss Cruickshank was insistent that the dances should be performed in a soft balletic style, and it was this style that Mrs Tibbie (Isobel) Cramb instilled during her classes at St Andrews.

Step Dancing in Aberdeen originated with Francis Peacock who was appointed by popular request as “sole dancing master within the Burgh of Aberdeen” in 1747 and remained in this office until his death in 1808. He was assisted and succeeded by his friend Archibald Duff, who seems to have toured the county, giving classes in the towns and teaching individuals in the great houses. It is probable that Hill had attended Duff’s classes. Duff also published, in 1812, a collection of dance music including the tunes for 27 Step Dances. The titles, such as “Pas seul for Miss Margaret Burnett of Leys” and “Pas de deux for the Misses Grant of Monymusk” make it clear that many of the dances had been composed specifically for individuals and doubtless consisted of different combinations of the standard steps. Unfortunately the instructions for many of Duff’s dances have not survived.

Many of the Dance Masters had their annual “Publicks” (balls) at which their pupils demonstrated their skills. Also the young ladies of the great houses performed at home to entertain their fathers’ guests, dressed in their best gowns and wearing indoor shoes.

The Hill manuscript is not our sole source of Step Dances. Miss Cruickshank taught Mrs Cramb three more. The Rose of Benbecula is adapted from a dance found in Canada by Mrs MacNab and Callum Brogach was given to Mrs Cramb by Florence Neill, whose grandfather, James Neill, had taught the late Queen Mother when she was a child.

Mrs Hope Little recalled that she and Miss Milligan attended Dancie Reid’s classes, in the afternoon at St Andrews before the war, at which he taught both the Scottish Lilt and the 6/8 Blue Bonnets, sometimes playing the fiddle as he danced! Also present at these classes was Elizabeth Dunbar, later Mrs West but affectionately known as ‘Tihi’. She was a member of staff and examiner in the early years of Summer School. The dance Highland Laddie, was also taught to her by ‘Dancie’ John Reid of Newtyle. Mrs West’s daughter, Wendy, continued the tradition of teaching Ladies Highland and Step at Summer School until recently, preserving the continuity of style.

Some popular modern dances, some of which were adapted from traditional sources, include:

There are several styles and traditions within Scottish Step dancing. These vary from hard shoe dancing and Hebridean style dancing to the traditions within the RSCDS repertoire described on this page. The step dances taught over the years at RSCDS Summer School and in Branch classes include traditional dances, like The Scottish Lilt and Blue Bonnets, passed on by generations of dance teachers.  Some of these dances cross over into the Highland repertoire. There are also dances, many of which are danced in a softer more balletic style, which have been reconstructed from notes and old manuscripts. In the last fifty years many new dances have been devised. In keeping with the traditions of step dancing, these new dances use a range of music of different time signatures and speeds.

Scottish step is a much freer form of dance than SCD and therefore much more open to the teacher’s interpretation.  Individual teachers frequently have their ‘own’ version of traditional dances.

In some of the videos of performances of Scottish step dances, for example from the Younger Hall demonstrations, the step dance teachers have choreographed the dances to present the most interesting visual experience for the audience.  This does not necessarily alter the basic dance steps, just the orientation in which they are danced, and occasionally the linkage between steps.

Both Step and Highland have been taught at St Andrews Summer School since the 1930s.  While Highland dancing now has a range of professional organisations which define and describe repertoire, their main activities are to run medal tests, award teaching qualifications and prepare dancers to compete by performing a small range of rigorously defined dances.  The RSCDS continues to foster a much wider range of traditional and more recently devised Step dances in a wider range of styles. Some dances, such as Flora MacDonald’s Fancy occur in both repertoires, but are danced in very different styles to different music. Some traditional Step dances contain technique also found in Highland, but more importantly the Society aims to preserve dances in the balletic style defined and taught by pioneers like Mrs Isobel Cramb, who researched and published dances, some of which had been handed down from teacher to teacher over many years.  Successive RSCDS Step dance teachers have devised modern dances in this softer style, and, as with the traditional dances revived and choreographed by Mrs Cramb, the music plays a vital part in the style and interpretation of the dance. 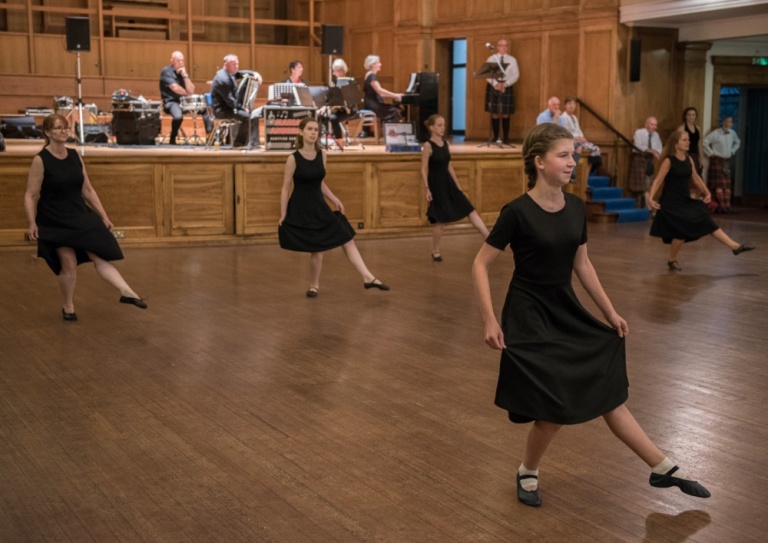